Apples. Arguably the most classic of all the fruits.

No matter how you slice ‘em (or eat ‘em whole) they make for a great snack. 88% of apples are consumed as such (after all, they’re the best naturally packaged food to eat on the go!) while 31% are added to recipes, and 22% end up as dessert (speaking of, have you seen our apple pie recipe? Or our apple crunch recipe?)

The most popular apples in stores are Gala, Honeycrisp, and Granny Smith. Though, of course, all of the varieties of apples are really worth exploring.

Since apples are so well-known and readily available, surely there can’t possibly be any secrets to apples that we don’t all know, right?

Well, turns out, there’s a lot more to know about apples. Say, for instance, that 25% of an apple's volume is air, which is why they float in liquid. Did you know that apples can range in size from the size of a cherry to the size of a grapefruit? Or that there are actually over 7,500 varieties (and counting) of apples?

Apeel is made for organic apples, and of those organic apples, the varieties we most treat are Fuji, Gala, Honeycrisp, and Granny Smith apples. That’s strictly because of how popular they are.

And now that we’re on a roll of little-known apple facts, we’re going to bring in the Apeel apple experts (Matt Kahlscheuer, Director of Biological Sciences, and Jon Dorsey, Associate Product Manager) to share some more. 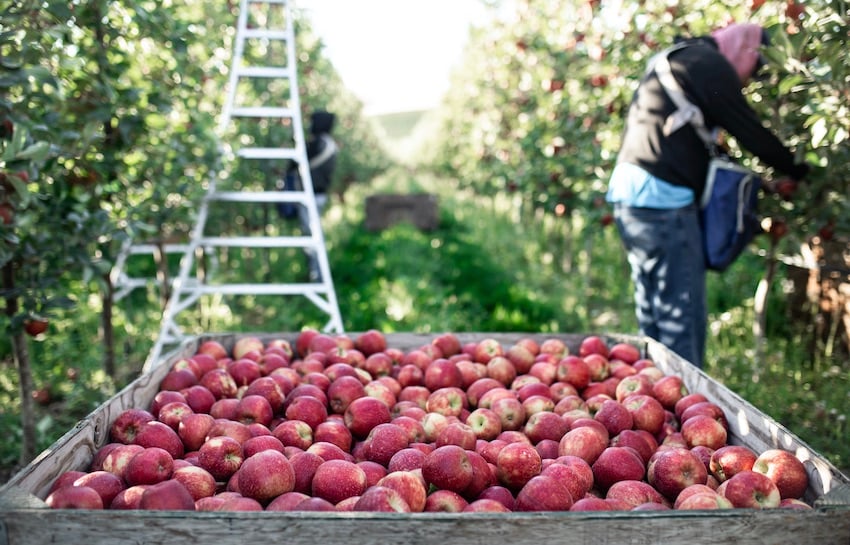 First of all, how do you become the experts on all things apples at Apeel?
Matt: In an effort to provide our own people at Apeel and our customers with the best possible scientific information for all of our active produce categories, each member of our Biological Sciences team has made an effort to become experts in at least one produce category. I love apples, and so that is what I chose to specialize in!

Jon: Luckily, apples fell into my lap… instead of falling on my head like Sir Isaac Newton! Kidding. My scope of work included both apples and vegetables when I started at Apeel, but I shifted to working exclusively with apples as demand grew for both of these categories.

Jon: Apeel makes apples last longer by slowing the rate of dehydration and protecting them against the onset of mold and decay. At its core (pun intended) Apeel Sciences is a material science company inspired by nature, so our formulations were designed to layer onto fruits and vegetables in a manner that mimics their skin and slows down their natural processes. In particular, the layer’s design slows down the rate at which water within the produce can escape, which helps retain the firmness and integrity of the apple. By helping to retain the integrity of the apple surface longer, it also slows down the rate at which fungal pathogens and oxidizing agents in the air get into the apple. As a result, the Apeel coating slows down oxidation and apple decay due to water and firmness loss.

How much longer can Apeel Apples last compared to a non-Apeel apple?
Jon: Two times longer! As a consumer, I rarely bought bags of apples for myself because I was unable to eat them all before they started to shrivel or rot. I no longer have to worry about this with Apeel.

And now for the most popular apple questions we get: What is the best way to reduce or delay apples from browning?
Jon: Apeel is a great solution to reduce or delay the onset of browning and decay on the surface of an apple. But, sticking with the theme of plant-derived solutions, if you plan to slice up an apple for a salad topping or as a snack for later, I recommend dunking the slices in a bowl of diluted lemon juice.

Speaking of, why do apples turn brown after you cut into them?
Matt: Apples turn brown due to a process known as enzymatic browning. It’s the result of a class of enzymes known as polyphenol oxidase (PPO) reacting with polyphenol compounds in the apple. In a whole apple, PPO is primarily contained in the cells of the apple and, as a result, is unable to interact with the polyphenols throughout the apple. However, when you cut or bite into an apple, the damaged cells release PPO and it begins adding oxygen from the air to all the polyphenols. The products are another type of molecule known as quinones and these can have a slight color to them. Unfortunately, these molecules are also highly reactive and will undergo further oxidation and eventually form the pigment melanin, which makes apples look brown.

And what’s the best way to store an apple for maximum shelf life?
Jon: For starters, place apples in the fridge. If you wanna go a bit further, make sure they are separated from one another and other produce in the fridge since they release ethylene which promotes ripening. An advanced technique would be to place apples in the fridge away from other produce and place a damp paper towel on top (this will increase humidity around the apple and will slow dehydration.

Currently, all Apeel Apples come from Washington state. Are apples that are grown in Washington any different from apples grown in different parts of the country or the world?
Jon: Central Washington is an optimal location for apple production. From an environmental standpoint, apple production is supported by an ideal arid climate, rich volcanic soils, and a continuous supply of water from the Cascade Mountains’ snowpack. From an ecological standpoint, the desert-like conditions are not suitable for most agricultural pests and diseases, so Washington’s apple industry is much less reliant upon pre-harvest sprays and fungicides. This is why Washington produces over 90% of the country’s organic apple supply.

What is your personal favorite apple variety and why?
Matt: I’m a big fan of Honeycrisp apples because they are extra ‘crispy’ as the name implies.
Jon: Yikes, this is a tough one. I have to say I’m pretty loyal to Golden Delicious apples because I grew up eating them and enjoy the sweet yet buttery taste.

Any final apple secrets you’ve been hoping to share?
Matt: Shameless plug here: According to the UN FAO, over 40% of fresh produce goes to waste. This doesn’t just lead to wasted food but also to wasted resources that go into producing that produce. The apple industry is no exception with an estimated 19% of apples going to waste at retail alone! By purchasing Apeel Apples, you’re helping to fight food waste and preserve Earth’s precious resources.
Jon: Apeel Apples not only keep the doctor away, they’re also good for the environment with a net negative environmental footprint. Buying Apeel Organic Apples is the responsible choice for you and the planet. (Yes! Another shameless plug!)

If you want to shop Apeel Apples near you, check out our store locator or get some of our food-waste-fighting apples at Imperfect Foods! Use the code "APEEL10" for $10 off your first two boxes.